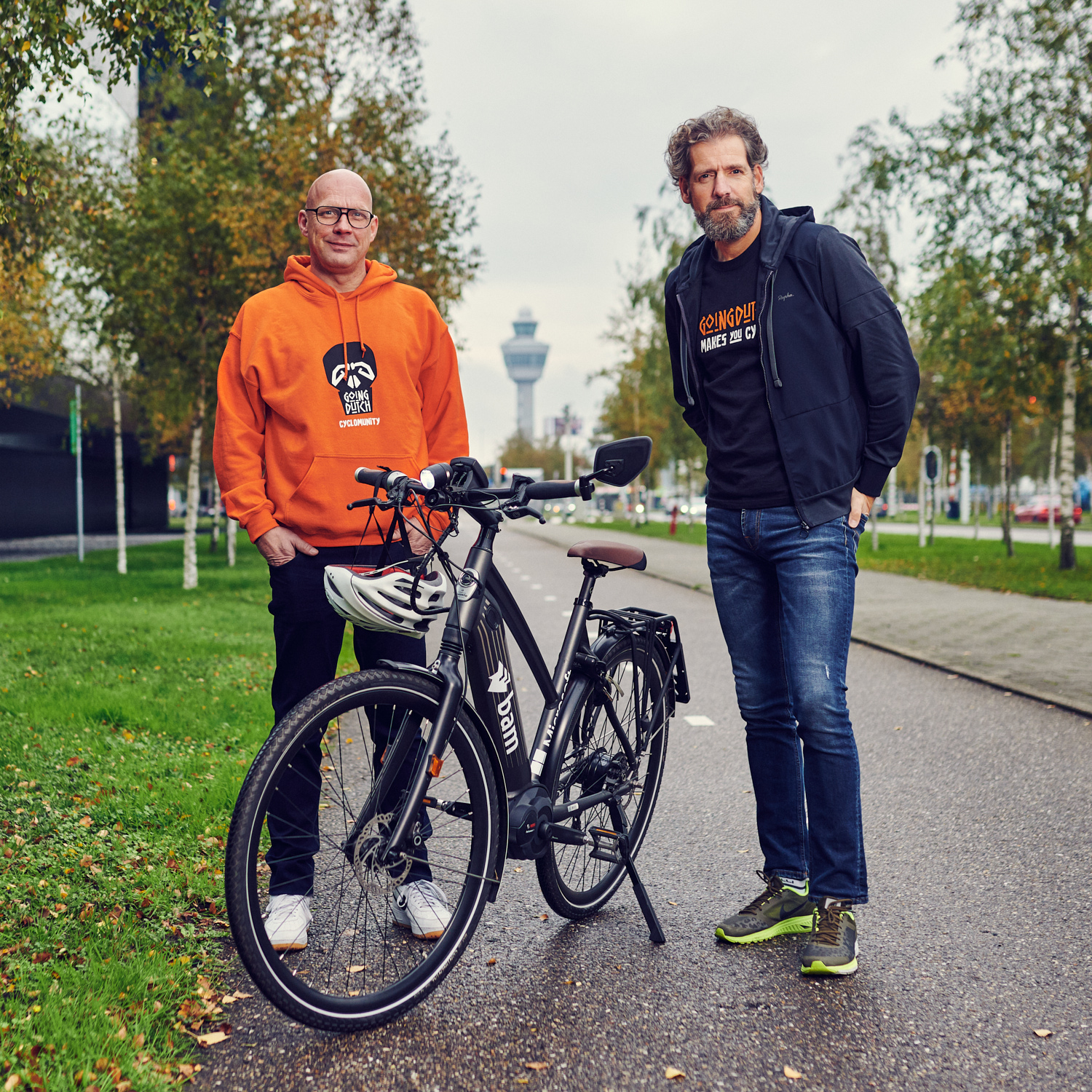 goinGDutch – a healthy lifestyle is just a bike ride away!

The first goinGDutch users are expected to cycle to Schiphol by March 2020. ‘We want to contribute to a healthy environment for everyone at the airport. One way to help achieve this ambition is to encourage safe, active, quick and comfortable cycling to and from work, and goinGDutch is a great way to do this,’ says Johan Winnubst.

We spoke to Johan, who is responsible for ground-breaking developments at the construction firm BAM, and Huub van der Linden, managing director of ICT firm OrangeNXT, about the project that they launched at the beginning of September together with Schiphol and Microsoft.

The core values of goinGDutch are as follows: cyclists’ interests at heart, a bicycle-friendly infrastructure, a bike assistant app that helps you plan your bike ride and appropriate clothing and offers tailor-made cycling advice to suit your needs on that particular day. We make sure goinGDutch cyclists have access to all of this and more.

Schiphol wants to make the airport more accessible to cyclists via smart cycle paths, priority crossings, bike parking with charging points for ebikes and facilities such as showers and changing rooms. The surrounding municipalities are working together to construct broader and connected cycle paths and new smart traffic lights. The app, the bike and the traffic lights communicate with each other during the ride, helping cyclists to surf a green wave. Furthermore, goinGDutch has a community of Schiphol bike riders.

This bicycle programme is very ambitious. Schiphol employs 66,000 people, 4,000 of whom cycle to work. ‘This needs to grow to 7,000 by the end of next year and 10,000 by 2024,’ explains Johan. ‘The trains and roads are very busy, so every little thing that can lighten this load will help’, adds Huub. ‘We need to truly open up Schiphol to cyclists. At the water cooler, we need goinGDutch riders to spread the word as enthusiastically as possible to their colleagues who usually take the car or train. To ensure this positivity, we need to make goinGDutch extremely attractive to cyclists.’

It’s unsurprising that Johan and Huub are so enthusiastic about their plans, as they are both keen cyclists themselves. However, they are realistic about the fact that not everyone can simply leave their car in the driveway. Huub, who lives in Eindhoven and travels to Schiphol by train, believes that a combination of modes of transport would be the most logical step. ‘My commute is much too far to cycle, but I often take the bike for shorter distances. There’s no better way to start or finish your working day! 20,000 people live within 15km of Schiphol, which is an ideal distance for the bike or ebike.’

Health and vitality are not the only considerations. ‘Cycling to work isn’t a viable time-saving option in Huub’s case, for example’, explains Johan. ‘However, it does help you to manage your time better. For example, if you’re always cycling, you don’t need to spend as much time at the gym.’ Huub adds ‘You can also arrange to cycle to work with a specific co-worker, so you can have your first meeting during your commute! The community plays a key role in this regard.’

The platform can potentially offer a huge range of possibilities. Everyone involved is intensively collaborating to explore these opportunities with full consideration for existing and potential cyclists among the Schiphol workforce. Huub already has a beautiful ebike, and he points out that as of 1 January, the government is introducing a new tax break on rental bikes for businesses and employees. ‘Bikes are not included in the goinGDutch package. This has to be agreed between employer and employee, and we take care of the rest!’

‘goinGDutch was officially launched in September 2019 by Minister Stientje van Veldhoven’, says Johan. We’re currently working hard to launch concepts and ideas, and there’s a lot of work still to do. If you have any inspiring ideas for us, we’d love to hear from you!